In this article, I have discussed the most common menstrual disorders faced by girls in their adolescence and the method of diagnosis of the same. 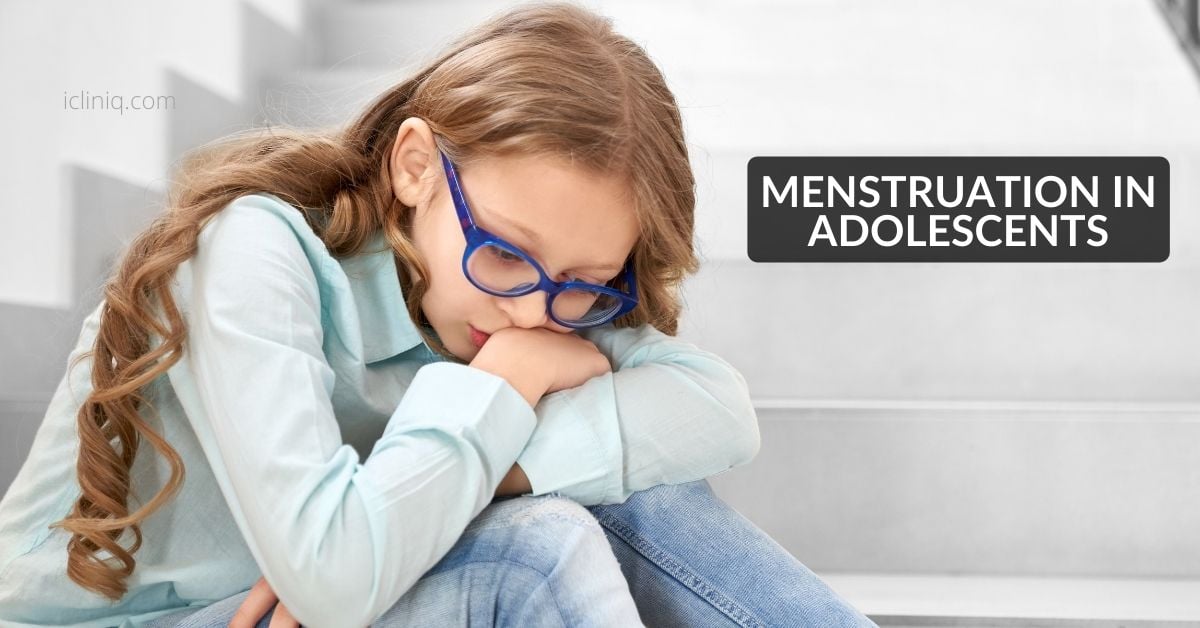 Female menstrual disorders are common during adolescence due to the slow maturation of the system situated in the brain called the hypothalamic-pituitary axis. The hypothalamic-pituitary axis is the mediator of the menstrual cycle. The failure of this system may lead to variations in the menstrual cycle. It can last up to two to five years after menarche (the first occurrence of menstruation). More than two-thirds of adolescent problems are related to menstruation in the forms of dysmenorrhea (painful period), amenorrhea or oligomenorrhea (absent or reduced periods), and menorrhagia (abnormal uterine bleeding).

It is one of the common gynecological complaints during adolescence. About 60% of girls between the age of 12-17 years complain of dysmenorrhea. However, only 15% seek medical advice. The first few periods are pain-free due to the absence of ovulation. After that, dragging pelvic pain is common. This is due to pelvic vascular engorgement under the reflex of sex steroids. Dysmenorrhea may be primary or secondary.

Primary dysmenorrhea (spasmodic) develops early after uterus menarche, within the first two years. It is defined as painful menstrual cramps in the absence of clinically detected pelvic pathology. Possible diagnoses in the case of atypical severe pain are endocrine, myometrial disturbing action, prostaglandins, and vasopressin.

Primary amenorrhea is when a girl does not start menstruation by the age of 16 years. Amenorrhea can be diagnosed with clinical history and examination. Also, we need to check thyroid tests, ultrasound, laparoscopy, and prolactin levels. Causes of primary amenorrhea are as follows:

Abnormal uterine bleeding is usually associated with anovulatory cycles. However, there are multiple reasons for anovulation.

The diagnosis of menorrhagia depends on a thorough history, clinical examination, abdominal and vaginal examination, ultrasound, and diagnostic hysterolaparoscopy.

Consulting about your menstrual disorder symptoms with your doctor can help decide what type of treatments can be best reduce or relieve your symptoms, including:

The treatment plan is based on the following factors:

1) Endometrial Ablation: It involves using heat, electricity, laser, freezing, or other methods to destroy the uterus lining. These are recommended only for womenwho do not wish to get pregnant anymore. However, in the following treatment, a person must use contraception. Even though the endometrial ablation destroys the uterine lining, there is a slight chance of pregnancy, which could be dangerous to both the mother and the fetus. But overall, endometrial ablation procedures have a reasonable success rate at reducing heavy bleeding.

2) Endometrial Resection: In this surgical procedure, the surgeon will use an electrosurgical wire loop to remove the uterus lining.

3) Dilation and Curettage (D&C): In a D&C, the cervix is dilated, and special instruments are used to scrape away the uterine lining. A D&C can also be used to diagnose abnormal uterine bleeding. It is usually done under local anesthesia in the out-patients. However, this treatment is often only a temporary solution to heavy bleeding.

4) Myomectomy: Fibroids, which are the common cause of heavy bleeding, get resolved by removing the fibroids by a myomectomy procedure.

5) Hysterectomy: This is a commonly performed surgical procedure to end heavy bleeding. It is the only treatment that guarantees that bleeding will stop. It is a radical surgery that removes the uterus. A lengthy recovery period of about four to six weeks may be required for some women. Fatigue associated with this procedure can last much longer.

What Are the Various Types of Menstrual Disorders?

What Can Be The Causes of Menstrual Disorders?

Which Disorder Is Identified by Painful Menstruation?

Dysmenorrhea is a menstrual disorder that can be identified by painful menstruation. The pain will usually be seen in the lower abdomen or pelvis.

What Can Be the Side Effects of Not Menstruating?

The side effects of not menstruating are loss of elastic support to tissues like skin, thickening of blood vessels, and weakening of bones.

Why Do Teenage Girls Get Irregular Period?

Irregular period is when a girl does not get her period for more than 4 to 5 weeks. It is normal for the cycles to be irregular for the first two years after the girl starts to get her period. But if the periods do not get regular even after the initial two years, it is considered irregular. Young girls usually get irregular periods due to hormonal imbalances. For example, if thyroid hormone levels are too low or too high can cause irregularities with periods.

Which Age Is Considered the Youngest Age for a Girl To Start Her Period?

For most girls, the first menstrual period is when she is around 12 years of age. But it can also be at eight years. The first period at the age of 8 or below is considered the youngest age for a girl to start her period.

What Are Health Conditions Related To Menstruation?

The health conditions related to menstruation are:
- Anemia.
- Depression.
- Asthma.
- Diabetes.
- Osteoporosis.
- Heart disease and stroke.
- Problems in getting pregnant.

What Are the Common Symptoms of Menstrual Disorders?

The common symptoms of the menstrual disorder may include:
- Abnormal menstrual bleeding.
- Pain or cramping.
- Headaches.
- Depression.
- Emotional distress
- Bloating or fullness in the abdomen.

How Do You Diagnose Menstrual Disorders?

The diagnostic methods for detecting menstrual disorders are:
- Physical pelvic examination.
- Pap smear test.
- A blood test or urine test is done to rule out pregnancy.
- Endometrial biopsy.
- Hysteroscopy (small camera inserted into the uterus to find out any abnormalities).

How Long Will a Period Usually Last?

An average period can last for about 2 to 7 days, but it is usually only 3 to 5 days for most women with a regular menstrual cycle.

How Will I Know if My Daughter Is Going To Get Her Period?

The three signs that your daughter will get her period are:
- The development of her breast buds.
- Growth of the pubic hair.
- Vaginal discharge (2 to 3 years before the first period).

Having backache badly and vagina smelly discharge. Can you suggest any treatments?

Query: Hi doctor,I am sexually active with one partner only. I am not well for the last 4 months. I am having bad backache and a smelly, white thick sometimes brown color vaginal discharge, lower abdomen pain and vaginal pain while urination. I have consulted my gynecologist and took proper medicine. Now a...  Read Full »

Tackling the Time Of Menstrual Cycle Every Month

Article Overview: Abdominal pain during periods is a very common issue affecting women. Adhering to a healthy lifestyle with a balanced diet, physical activity, mental relaxation, etc., improves the ability to cope with pain. In this article, you will learn about menstruation and its phases, types of menstrual pain, its management, and home remedies.  Read Article

What Is Normal Menstruation? During the menstrual phase of a menstrual cycle, the lining in a woman's uterus usually sheds, which is called menses, period, or a cycle. The menstrual cycle in fertile females can occur every 28 days, on average. The length of each cycle may also vary between 26 and ev...  Read Article

Do you have a question on Intermenstrual Bleeding or Abnormal Uterine Bleeding?