Delayed Periods: When to Suspect Pregnancy?

This article discusses the possibility of unintended pregnancies in young sexually active women and suggests some hints on timing the intercourse to minimize the risk of unplanned pregnancies, and consequently their adverse effects on the female reproductive health. 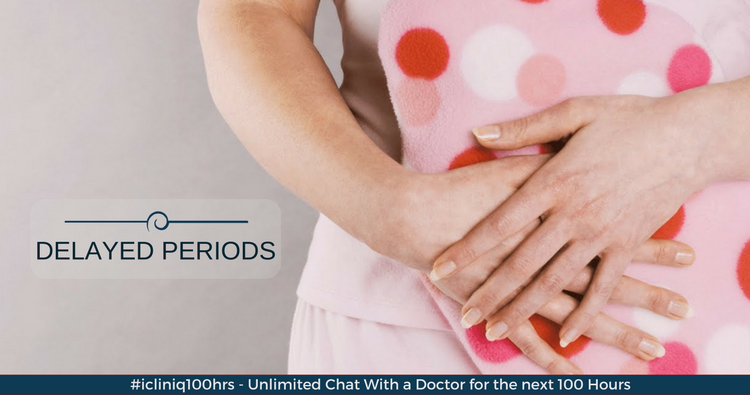 Being sexually active brings pleasure along with its own set of risks, unwanted pregnancies being one of them. A delayed period could be a sign you are pregnant, but not always. Periods can be late due to various other factors such as stress, illness, exhaustion, contraceptive pills, obesity, thyroid disorders, and depression, among others. Unless you are actively trying to conceive, the delayed period can give you a great range of reasons to worry. That is why many sexually-active women (and men) almost always fear the worst and get paranoid when it comes to facing the situation of a possible pregnancy at a time when they are not ready for it. The following list will not only clear your confusion but also help you understand how to effectively minimize the chance of pregnancy in the future, especially when you use a combination of two or more factors.

The timing during your cycle when you have sex is the most important determining factor. Although having unprotected sex during the 'safe period' still carries a 20 % chance of getting pregnant, doing so during the fertile days increases the chances to more than 33 %. Calculate your risk using a safe days calculator. You might take help from a few Apps to keep a record of your periods regularly.

Use of Contraception Methods:

If you use one or more of the various types of contraceptives available, that would drastically reduce the chance of conception. In the case of condoms, the effectiveness is 98 % when used correctly, while the emergency contraceptive pills are 89 to 95 % effective depending on when you take them. Another common form of contraception used is the pull-out method, which is 73 to 96 % effective in avoiding pregnancies, while IUDs (intrauterine contraceptive devices) are effective more than 99 % of the time.

Condoms do a fairly good job in contraception. There are condoms for both males and females. A combination of both can contribute to successful contraception.

There are a few rules to be followed while using a condom. They are:

Oral contraceptive pills are taken by women and are known to be 99.9% effective. These pills have a certain amount of estrogen and progesterone hormones in them. It can act by altering the lining of the womb so that the egg from the ovum does not get fertilized.

Regular periods are usually associated with regular ovulation, which then happens during the mid-cycle. So, if your menstrual cycles are regular, it is fairly easy to assess the risk of pregnancy by calculating how far or close to the ovulation dates you had intercourse and accordingly the chances would increase or decrease. Normally, in a 28-day cycle, days 12 to 18 are unsafe days and having intercourse during these days carries a high risk.

Even though you may experience various pregnancy symptoms such as nausea, breast tenderness, bloating, increased urge to urinate, food cravings, abdomen cramps, constipation or increased basal body temperature, these are not definite signs of pregnancy. But, it is good to be aware of these changes and consult a gynecologist when in doubt.

Another symptom most women complain of early on is an unusual sense of fatigue. It can be so severe you cannot get out of bed, and, even if you manage to do so, it can be so bad you are unable to stay awake.

The hormones can wreak havoc on your mood during early pregnancy, just like they do during a period. If you find yourself abnormally low or grumpy, it can be an early sign. You can expect to notice this symptom two to three weeks after possible conception.

Markers of pregnancy are detectable in the blood and urine early on in the pregnancy. Though the home pregnancy test using a urine sample is quick and convenient, with the serum beta-hCG test there are fewer chances of getting a false result. So, when to test? A urine pregnancy test can be done a week after the expected date of periods and the beta hCG test is best done one to two weeks after you have had sex for a more reliable result.

If you are still uncertain of your risk, it is a good idea to schedule an appointment with your specialist doctor at the earliest, to rule out the exact cause of delay in your period. He/she will suggest a few tests which can conclusively rule out pregnancy and put an end to your worrying.

How Much Delay Is Normal in Periods?

A delay of two to seven days is normal. The delay can happen in different conditions such as stress, pregnancy, obesity, and change in hormonal levels. A normal menstrual cycle lasts for three days.

What Can Cause Your Period to Be Late?

The causes of delay in periods are pregnancy, menopause, breast-feeding. These are the causes of natural delay in periods. Lifestyle changes such as a change in food patterns and climatic changes can cause your periods to delay. Stress has also known to be the cause. Some conditions, like polycystic ovary syndrome, can also be the reason.

Is It Normal to Miss a Period for a Month?

If you have just reached puberty, it is normal for you to miss a period for a month. It takes time for your menstruation to become normal. But in people who are more than 20 years of age, it is not normal to miss your periods. You should consult your doctor and find out the reason for the delay.

Why Did I Miss My Period If I am Not Pregnant?

Sudden and extreme weight loss, hormonal imbalance, stress at the workplace might be the reasons. If you generally have regular periods, you should talk to your doctor about your menstrual cycle to detect any other health conditions.

Is White Discharge a Sign of the Arrival of Periods?

How Many Days Should I Wait to Confirm My Pregnancy?

What to Eat If Periods Are Not Coming?

During irregular periods, here are some home remedies you can try to get your periods:
- Turmeric. Try adding turmeric to milk and drinking it.
- Cumin.
- Unripe papaya.
- Practice yoga and meditation.
- Cinnamon.
- Ginger juice added to water.
- Aloe vera juice.

How Soon Do Pregnancy Symptoms Begin?

The early signs of pregnancy can be seen in 22 days from your last periods. The signs are tenderness in nipples, nausea, backache, headache, and cramps in the abdomen. However, you can have confirmation only after you miss your periods.

How Can I Get Periods Immediately With Pcos?

What Are Uncommon Signs of Pregnancy?

Pregnancy tests are negative, but am still having pregnancy symptoms. Why?

Query: Hi doctor, I am a 27 year old female, who started taking birth control pills eight months back, but I only took it for a week and stopped taking them. In that same week, I had unprotected sex with my fiance, and I had my periods the next day. The next month I got my periods two weeks earlier, and I ...  Read Full »

Query: Hi doctor, I have been trying to conceive for a few months, but every time the test comes back negative. My last periods was on the 25th of last month, and I started ovulating on the third of this month, and it ended on the 12th. My husband and I had sex on the fifth. Despite my history of irregular...  Read Full »

I had sex with my partner last month and missed periods. Am I pregnant?

Query: Hello doctor, I am 35 years old and I had sex with my partner last month. My expected period date was a week later. Still, I did not get my periods. I have tried testing pregnancy strips the result was negative. I consumed Regestrone tablets for the past four days. We do not want to have a baby beca...  Read Full »

Do you have a question on Delayed Period or Unplanned Pregnancy?