Do you feel bloated and have abdominal cramps after consuming milk products? This can be due to your inability to digest lactose (sugar) in milk. Learn more about lactose intolerance. 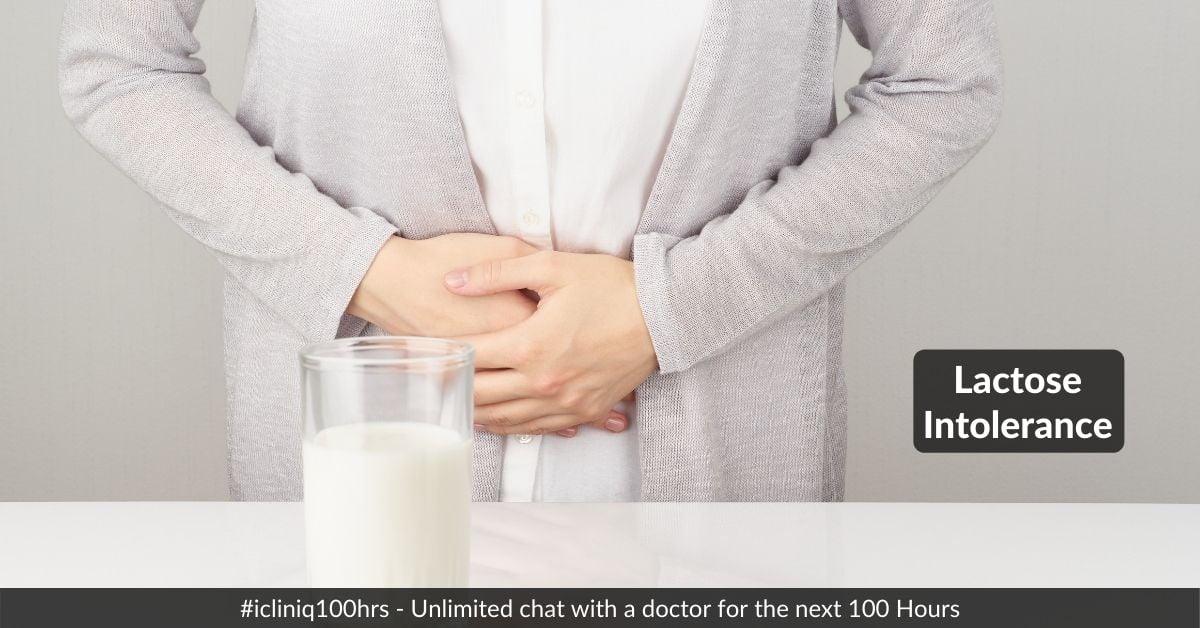 Lactose is a carbohydrate compound having two sugar molecules, hence, it is a disaccharide. The two sugars are glucose and galactose. It is used as a source of energy after its breakdown in the body by an enzyme called lactase and ultimately being absorbed in the bloodstream and providing energy.

The deficiency of lactase leads to transport of undigested lactose through the gut and can present with digestive symptoms like bloating, abdominal cramps and/or diarrhea.

Hence, lactose intolerance can be explained as a disorder of the digestive system in people having less lactase enzyme and thus, possess decreased ability to digest lactose.

This condition is very rare to be seen in children less than 5 years of age and statistics show that almost 75 % of the population in the world is lactose intolerant.

The causes can be broadly classified into two types:

It is the most common among both and is caused by the reduction in the production of lactase and thus, lactose absorption becomes poor. Since it is seen more commonly in some populations than others, genetics is believed to be one of the major causes. Studies have shown that Asians and Africans are the most affected.

What diet can I take to increase my weight? I am lactose intolerant. Please help.
Please suggest a good diet for my 2.6 years old son to keep his gut healthy.
What does the presence of starch in the stool indicate?

This form is rare and is secondary to some disease or illness like stomach issues or sometimes, serious issues like celiac disease. The mechanism is that the gut wall inflammation can lead to a decrease in the production of lactase temporarily.

It can present with simple to major gastric symptoms. The most commonly seen symptoms include:

Some others experience the following symptoms also:

The reason behind the loose motion is the lactose in the small intestine that is undigested which leads to the movement of water into the digestive tract.

After reaching the colon, fermentation of lactose happens by the bacterias present in the gut, leading to the formation of short-chain fatty acids and gas. All this leads to bloating, flatulence, and pain.

The severity of symptoms varies from person to person depending on the lactose tolerance level of the individual and how much consumption has been done.

These patients avoid dairy products so that they can avoid the symptoms and thus, they are lacking the nutrients available through dairy products.

Studies have shown that though it is advisable to avoid milk products some people show no effect to very minimal lactose content or on the consumption of minimal lactose-containing foods like certain variants of cheese, curd, butter, etc.

Since such people can lack calcium due to the limited or less intake of dairy products, they need to add other foods that are rich in calcium. Some of the good food sources for calcium are as follows:

Giving up dairy products can be very difficult. So, you can try the following remedies but with your physician’s consent.

There are commercially available enzyme supplements that help in digesting lactose. They are available as either tablet that can be swallowed or as drops that can be added to the food or drinks before consumption. But the effectiveness can vary from person to person.

This is based on the fact that continuous exposure to lactose can make the body adapt t it. But, there are not enough studies to prove this fact and thus, seek medical consultation before trying this.

Probiotics are those microorganisms that deliver health benefits after consumption, whereas, prebiotics are the fibers that act as the food source for these micro-organisms. One of the most beneficial ones that have been documented is the Bifidobacteria that is found in probiotic curds and supplements.

Lactose intolerance can affect the day-to-day life in terms of not being able to consume dairy products and thus can make the person deprived of some essential nutrients like calcium. Hene, it is important to take such nutrients through other food sources.

With the help of online medical platform, it has become easy to consult an expert to know the details regarding any health issues. So, before trying anything for lactose intolerance ask an expert to clear your doubts.

Can you suddenly become lactose intolerant?

What are the foods to be avoided if you are lactose intolerant?

Avoid certain foods like cheese, condensed milk, creams, hot chocolate, ice creams, yogurt, butter, dips, and buttermilk. It is better to avoid all the foods which are rich in lactose.

Why does ice cream upset my stomach but not milk?

When levels of the lactase enzyme are high, eating something like a bowl of ice cream or a slice of cheesy pizza cannot cause any signs and symptoms. There is a possibility that you might have consumed milk when your lactase enzyme levels are relatively low. However, if you are a known lactose intolerant person, it is better to avoid both milk and ice-cream.

What are the symptoms of lactose intolerance in adults?

The symptoms are abdominal pain, abdominal cramps, bloating, flatulence, rumbling sounds in the stomach, and nausea. The symptoms of lactose intolerance typically show within 2 hours after consuming dairy products.

Do eggs cause dairy intolerance?

Firstly, an egg is not a dairy product. It does not contain lactose and it is absolutely safe for an individual to consume eggs even though he is lactose intolerant.

What is the diet plan for a lactose intolerant person?

A bowl full of fiber-rich cereals along with the favorite fruit of your choice and rice or soy milk is a healthy breakfast idea. Eat frozen foods made from rice or soy milk. Soy milk is an excellent alternative to dairy products.

How can I test myself for lactose intolerance?

It is not possible to self-diagnose lactose intolerance. A doctor can test lactose intolerance by asking questions about your symptoms. He or she may also tell you to avoid dairy products for a short time to see if your symptoms improve. Sometimes, you might require a hydrogen breath test or a blood test to confirm the diagnosis.

Are there any pills for lactose intolerance?

Over-the-counter pills that contain lactase can be taken before meals to help reduce or eliminate symptoms. These pills reduce the breakdown of lactose and help in tolerating dairy products. Always consult a doctor before taking any pill.

How to stop lactose intolerance pain?

You cannot suddenly boost your lactase level, but you can avoid the symptoms of lactose intolerance. Taking pills that contain lactase before meals will help you reduce the ill effects.

Lactose intolerance can be worrying even though it is very common. It is hard to avoid all dairy products. Abdominal pain and cramps will cause distress in an individual. The nauseating feeling will disturb the normal social life.

Can excess gas cause floating stools?

Query: Hi doctor, I am a 47 year old male. I have noticed floating stools for about two months. This may have been going on longer, but I just noticed two months ago and historically, this is not normal for me. Consistency is solid with somewhat limited quantity and more like you would expect with constipa...  Read Full »

Why am I not able to digest milk and ghee?

Query: Hi doctor, My left nose has been blocked for a few years and some thin material is coming out of it. I am always feeling tired. I cannot digest ghee, milk and my stomach always feels empty. My body heat level is high and I am sweating more. I am also losing weight and getting thin. My blood report a...  Read Full »