Illness anxiety disorder (IAS), also called health anxiety, is a term used to describe a person who is excessively worried about a serious illness. Read the article to know its causes, symptoms, diagnosis, and treatment. 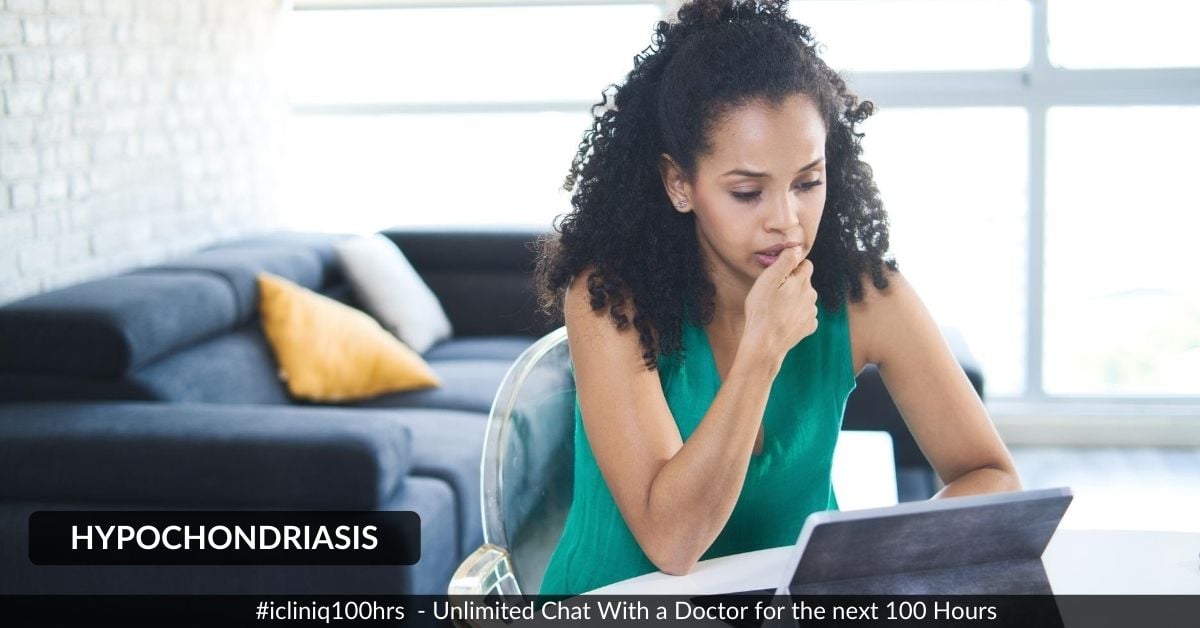 What Is Illness Anxiety Disorder?

Illness anxiety disorder (IAD), otherwise called health anxiety, is overwhelming anxiety about a perceived illness lasting for a period of more than six months. People with IAD often rush to their primary care physician, fearing that they have a serious condition. The doctor's reassurance that it is nothing does nothing to calm their nerves. They then switch doctors because they suspect their physician has missed something major. There are also a few who avoid simple check-ups and investigations due to the fear of being diagnosed with a chronic disease.

The person might not show any physical signs or symptoms, or they believe that even a small symptom is a sign of a serious underlying health condition. The thought that something is wrong with them and the anxiety that accompanies can even disrupt the person's life. It is a chronic condition that can either go away or become intense with age. It usually increases during periods of stress. Psychotherapy and medication might help the person feel better.

IAD was previously referred to as hypochondriasis, but The Diagnostic and Statistical Manual of Mental Disorders (DSM-5) that was published by the American Psychiatric Association does not include hypochondriasis or hypochondria as a diagnosis anymore. The term has now been changed to illness anxiety disorder. In this disorder, the person interprets uncomfortable or unusual physical sensations as a sign of some serious medical condition.

A similar condition called somatic symptom disorder focuses on a particular symptom and its disabling capacity, rather than worrying that the symptom is due to a specific illness.

What Are the Symptoms of Illness Anxiety Disorder?

The symptoms of IAS are:

What Are the Causes of Illness Anxiety Disorder?

Doctors are not sure what exactly causes health anxiety, but the following factors seem to play a role:

Some of the factors that increase the risk of IAD are:

How Does a Doctor Diagnose Illness Anxiety Disorder?

IAD usually starts in early adulthood or soon after losing a loved one to the disease.

Their physician suspects IAD when the person's complaints and history do not co-relate to their clinical findings. They are then referred to a mental health specialist, although, more often than not, he/she refuses to consult one. The symptoms may also be reported by a close friend or family member. Other signs to note are visiting multiple doctors without any conclusive findings.

A doctor will diagnose this condition based on the following criteria marked by the American Psychiatric Association:

What Are the Treatment Options for Illness Anxiety Disorder?

The hardest part of treating hypochondriasis is to get the patient to believe that their problem is more mental than physical. Since the physical symptoms they feel are very realistic, it is difficult for them to accept that there is no ailment. It is thus important for the doctor to deal with it correctly without brushing off the patient's concerns. This disorder is fairly common, and fortunately, physicians know how to provide assurance in a proper way. The most accepted treatment is cognitive behavior therapy (CBT).

What is Cognitive Behavior Therapy?

The person is taught strategies to cope with their anxiety. This includes multiple sessions that are designed to gradually reduce their anxiety by exposing them to their fears as well as replacing their negative thoughts with positive ones. It includes:

What Are the Complications of Illness Anxiety Disorder (IAS)?

If left untreated, IAD can lead to:

There is no sure way to prevent IAD. Some of the things that you can do are being aware of your symptoms and seeking immediate medical advice. This can prevent the symptoms from getting worse. Performing stress management and relaxation techniques can prevent stress from affecting your health.

If you have been diagnosed with IAS, make sure you take your medications timely and stick to your treatment plan suggested by the mental health professional.

Query: Hello doctor,I am having repeated thoughts in my head from the last four months. This problem started at the age of 13, but on a periodic basis like three to six months. After that, it becomes normal. When I am in this phase, I have scary thoughts, feel like mind is racing, have wavering thoughts a...  Read Full »

My anxiety disorder relapsed after I drank beer. What should I do?

Query: Hello doctor, I have anxiety and panic since five years. My GP had given Nexito forte and Veniz XR 37.5. And, I felt better and asked him to reduce the dosage two years ago. He stopped both and gave Nextio plus from then till date. I felt better. I did not smoke or drink while on treatment. 10 days ...  Read Full »

Article Overview: Apart from the effects it has on your physical health, HIV infection can create significant fear and anxiety. To know how counseling will be helpful, read the article. Read Article

Do you have a question on Anxiety Disorder or Psychiatric Illness Denial Factors?