How to Stop Nose Bleeds?

Bleeding from the nose is a very common condition and usually nothing to worry about. This article discusses the steps for managing an active nose bleed. 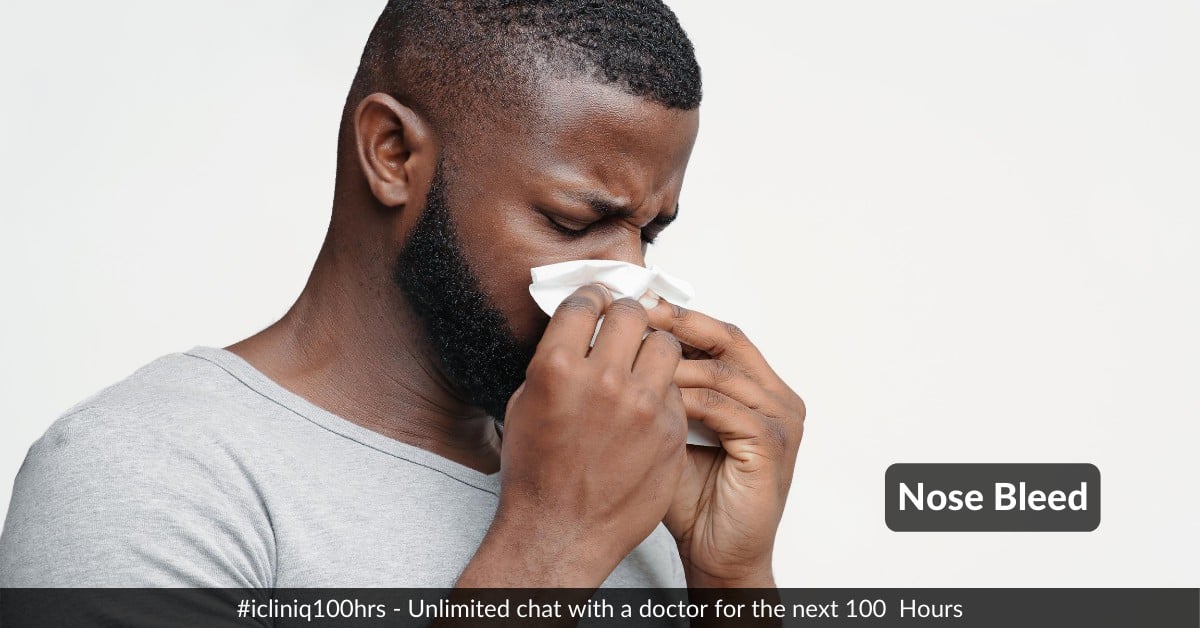 What Is Nose Bleeding (Epistaxis)?

Nosebleed, also referred to as epistaxis, is one of the most common ear, nose, and throat (ENT) emergencies present to the emergency department or the primary care clinic. When there is bleeding from the nose, it is called nose bleeding. It is very common, particularly in young children and adults over 65. Nosebleeds are more common in adults and young children between 3 and 10 years.

What Are the Types of Nosebleeds?

The two types of nosebleeds are:

What Are the Five Arteries That Supply the Nasal Cavity?

The five arteries that supply the nasal cavity and cause nose bleed when ruptured are:

What Are the Signs and Symptoms of Nose Bleeding?

The signs and symptoms of a nosebleed may include:

Nosebleeds can be scary to the person who gets them, but it rarely indicates a serious medical problem. The nose contains many blood vessels located close to the surface in the front and back of the nose. These blood vessels are very fragile and can bleed easily.

Why Does the Nose Bleed in Children?

Why Does the Nosebleed in Adults?

Nosebleeds are usually caused by the rupture of a blood vessel within the nasal mucosa. The rupture of the tiny vessels can be spontaneous. Nosebleeds are more common in individuals who have medical conditions like allergies, leukemia, nasal polyps, or sinusitis. Individuals who take some types of medicines like anti-inflammatories, blood thinners, or nose sprays are also more prone to get nosebleeds. Nosebleeds can also occur due to trauma or secondary to other comorbidities or malignancies. An increase in the patient's blood pressure, anticoagulant medications, and clotting disorders can also increase the bleeding time and episode length.

What Are the Common Risk Factors for Nose Bleeding?

The common risk factors associated with nosebleeds are:

When to Consult a Doctor for Nosebleeds?

There is no need to consult a doctor for mild nosebleeds, which stop within 15 minutes. But seek emergency medical help if there are:

If there is nose bleeding in children suddenly without any accident, seek immediate help from a healthcare professional. Recurring nosebleeds can be a little disgusting, but they are usually nothing to worry about. However, it is important to discuss them with the doctor to investigate to ensure that no underlying medical condition is causing the bleeds.

Bleeding may be more if you are hypertensive or on blood-thinning drugs. In these cases, medical management for raised blood pressure or altering blood-thinning medications by the primary clinician is critical in managing the bleeding. Please note that pouring water over the head has no effect on the bleeding. It is important to see an ENT (ear, nose, and throat) doctor if the bleeding is profuse and not stopping with one or two attempts of the above technique. It is advised to continue following these steps while traveling to the hospital.

If there are recurring nosebleeds in a child, consult the doctor to identify the cause and commence a proper treatment. For example, if the nosebleed is due to ongoing infection, the doctor may prescribe an antibiotic ointment or medicine. Anemia in children due to heavy blood loss through nose bleeding is very rare.

How to Prevent Nosebleeds?

Nosebleeds are common and do not always indicate a chronic medical problem. But the current age and health status of the patient should be taken into consideration in the management of nosebleeds. Therefore, if this happens to your little ones or elderly loved ones, you know the possible causes and the things to be done to manage them.

Nosebleeds can be a sign of bleeding disorder or hypertension. Allergies and cold can also cause it. It is not serious all the time. If your bleeding persists for an extended period of time, then you should seek medical help.

What Causes Sudden Nosebleeds in Adults?

The causes of sudden bleeding in adults are:
- Dry temperature indoor. This might also cause your nose to become dry and susceptible to bleeding.
- Pricking of the nose.
- Stress could also be a factor.
- In pregnant mothers, nose bleeding can occur due to the alterations in the level of hormones.

Can Stress Cause Nosebleeds?

Yes, stress can cause nosebleeds. It most commonly occurs in young children and older people. Many medical reports suggest that stress and anxiety trigger nosebleeds. Sometimes, a headache that is caused by stress will be accompanied by a nosebleed.

What Do I Do When My Nose Is Bleeding?

If you are facing nose bleeding, then follow the below steps:
- Do not line down flat. It is necessary to sit straight and slightly bend forward. In this position, open your mouth and breath in deeply.
- Pinching the nose also helps.
- Ice packs can be applied over the nose to aid in stopping the nosebleeds faster.
- Do not cover your nose with cotton. Resist the urge to tilt your head backward.

How Often Is Too Often for a Nosebleed?

If you are having nosebleeds around two to three times a month, then it might indicate the presence of chronic allergies. If you are facing nosebleeds more than four times a week, then it is an indication of severe medical health conditions. You have to check whether any daily medications are causing the nosebleeds.

Can a Nosebleed Be a Sign of a Stroke?

The occurrence of nosebleeds in stroke patients can be a rare symptom. In some cases of hereditary hemorrhagic telangiectasia, the symptom of nose bleeding is seen. It is known to happen due to ischemic stroke.

Can Iron Deficiency Cause Nosebleeds?

Iron deficiency does not directly cause nosebleeds. If an iron content in the body is low, it might indicate lower blood platelet levels. This can lead to a condition of clotting disorders. Most bleeding is frequently seen in these disorders.

Can Dehydration Cause Nosebleeds?

Yes, dehydration can cause nosebleeds. If you are dehydrated, then the slimy layers of the skin will become dry. If the slimy layer is dry, the lack of moisture will reduce its ability to prevent dust and infections. This might result in damages to the blood vessels.

Is It Safe to Sleep After a Nosebleed?

It is not advised to lie down or sleep after the nosebleed. You have to give sufficient time for the nosebleed to stop completely. Instead of lying down, you can raise the height of the pillow as much as possible. This will provide you comfort.

Yes, nosebleeds can indicate heart conditions like hypertension and heart failure. A nosebleed can happen due to a rapid increase in blood pressure. Medical reports from the American Heart Association explained that nosebleeds could be accompanied by headache, anxiety, and shortness of breath.

When Should I Worry About Nosebleeds and Headaches?

If you get nosebleeds very rarely, then you don't need to worry about it. Frequent episodes of nose bleeding require medical attention. If you are facing bleeding of the nose for a period of more than 20minutes, then help from emergency service is required.

What Does It Mean When Your Nose Bleeds During Night?

Nose bleeding during night time can happen as a result of a few habits like nose-picking. Children who are having these habits tend to pass trauma to their nose by inserting their fingers. They might do it unconsciously when they are sleeping. This can damage the blood vessels of the nose and cause nose bleeding.

What Can Cause Nosebleeds Every Day?

What Should You Do After a Nosebleed?

After a nosebleed, you are advised to stand erect or sit straight. You have to tilt your head forward to prevent the bleeding of the nose. Applying pressure over the nostrils will reduce bleeding within 10 minutes. If the bleeding prolongs, then you should consult the doctor immediately.

How Long Should You Rest After a Nosebleed?

Following preventive measures for nosebleeds is recommended. If you fear getting nosebleeds after it has stopped, you will be advised to place a nasal gel or antiseptic cream inside the nostrils. It can stay in the nostrils for at least twelve hours. Resting one or two hours after nose bleeding is necessary.

Why Do I Get Nosebleed in the Summer?

Dry air during the summer season is the most common cause of nosebleeds. Dry air is generated due to low-humidity climatic conditions, hot environment, or heated indoor air. These conditions lead the nasal membrane to dry state and become cracked or crusty, resulting in bleeding when picked, rubbed, and blowing off the nose.

Hypertension - How Aware Are You?

Please check the answer key and get to know how much you know about hypertension based on your score. 0-3: You need to learn more 3-6: A little more knowledge is good for health > 6: Keep updating yourself Question 1: Hypertensive patients should avoid exercise a) True b) False Answer:...  Read Article

Blood is coming from my nose and mouth. What may be the reason?

Is frequent nose bleeding without any reason normal?

Query: Hello doctor, I would like to ask if the nose bleeding is normal? I mean the father's family are like this. They just get the nosebleeding out of the blue and so the child too, just a while ago. I am really worried about my nephew. Is this normal? Or something serious is going on? Please help me.  Read Full »

The Best Sleeping Position for Asthma

What Causes Itching After Sex?

Do you have a question on Epistaxis or Bleeding From Nose?