Role of Angiography in Modern Era

Angiography is done to visualize the insides of blood vessels using X-rays. Learn about the various types and uses of angiography.

Contents
What Is the Meaning of Angiography?
How Is Angiography Helpful?
Some Interesting Facts About Angiography
Health Tips 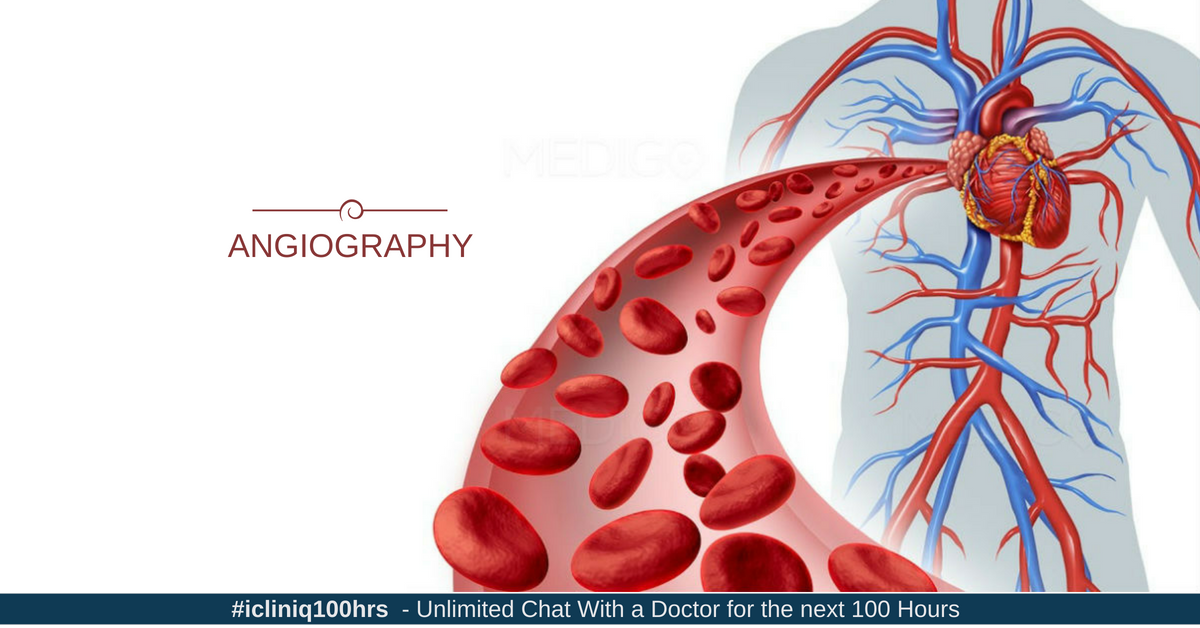 What Is the Meaning of Angiography?

The word angiography has originated from the combination of two Greek words i.e, angion meaning 'vessel' and graphein meaning 'to record'.

How Is Angiography Helpful?

Angiography is an excellent investigation to diagnose a variety of vessel disorders in various parts and organs of the body like:

1) Coronary angiography: It is done to diagnose the narrowing of coronary arteries which supply blood to the walls of the heart and their narrowing/blockage leads to myocardial infarction/ischemia i.e, in simple language, a heart attack.

Related Topics
Heart Attack Explained
Is a ketone diet good for those who are diabetic?
Father died during angioplasty due to pulmonary edema. Need second opinion.

2) Cerebral angiography: It is done to diagnose abnormalities of the blood vessels of brain.

3) Pulmonary angiography: It is done to diagnose pulmonary embolism (blockage of main vessel of the lung).

4) Peripheral angiography: It is done to diagnose the occlusive disease of the arteries of limbs specifically legs.

5) Renal angiography: It is done to diagnose renal artery stenosis (narrowing of arteries that supply blood to the kidneys).

6) Spinal angiography: It is done to diagnose vascular malformations and certain tumours of spine.

Some Interesting Facts About Angiography

Consult a cardiologist online to know more about angiography --> https://www.icliniq.com/ask-a-doctor-online/cardiologist

What Is Angiography, and How Is It Performed?

Angiography (Angiogram) examines blood vessels by injecting an iodine dye, commonly called the contrast medium, and viewing it under X-rays. Physicians perform it in the angio laboratories. It is performed when the patient is lying on his back, where a unique sheath and then the catheter are moved up in the vein with the groin or wrist's arteries.

Can an Angiography Test Be Painful?

Angiography is a painless procedure where the pain felt is less than the pain in a routine blood test. There is no pain during the angiogram as there are no nerves present in the arteries.

Why Is Angiography Needed?

Angiography is needed to detect and treat conditions like:
- Heart-related problems.
- To identify narrowing of blood vessels in patients with leg cramps or claudication.
- Renal stenosis (to prevent high blood pressure).
- In head to detect and repair stroke.
- To locate blockages in the lungs.

How Much Time Does It Take to Perform Angiography?

Angiography can usually take 30 minutes to 1 hour, but it may also take a long time if combined with other catheterization procedures. The duration also depends upon the medical condition of the patient.

How Do You Differentiate between Angiography and Angioplasty?

Angiography gives detailed information about the heart's functions and the amount of oxygen present in the blood as it passes through the heart. Angioplasty is used to narrow the arteries or reconstruct the blocked blood vessels, followed by an angiogram. Local anesthetics are used in both procedures.

Can I Eat before Angiography?

It would be best if you did not eat anything eight hours before the angiography to pinpoint problems in your heart and arteries.

How Is Angiography Conducted?

Angiography is an imaging technique that examines blood vessels by injecting a special like iodine dye, commonly called the contrast medium, and viewing it under X-rays. It is done when the patient is lying on his backbone, where a single sheath and then the catheter are passed up in the vein with the groin or wrist's arteries.

Do I Have Any Risk in Taking Angiography?

﻿Angiography is a safe procedure across all age groups, but it also has minor side effects like soreness and bruising and a small risk of serious complications.

What Are the Types of Angiography?

What Are the Advantages of Angiography?

The advantages of angiography are:
- This provides proper localization of the bleeding.
- It has a therapeutic benefit that includes vasopressin infusion or embolization.
- It does not require the preparation of the bowel.

Is There Any Alternative Method for Angiography?

An alternative for angiogram is the non-invasive test called CT angio, which has limited sensitivity and specificity. But also to proceed for angioplasty to eliminate the block, one needs the conventional angiogram where CT angio is not helpful.

Should I get my heart checked as a heart attack runs in my family?

Query: Hi doctor, I am a 30 year old female. My father who is 65 years old has suffered from two very severe heart attacks, one recently and another two years back. His father and brother both died in their 50s from heart attacks. Is heart attack genetic? Should my son and I get tested?  Read Full »

I have high blood pressure for a year. Can I have WPW syndrome?

Query: Hello doctor, I am a 36 year old female. I am overweight. I have BP problem since a year. I was initially taking Cilacar 5 mg. Later the dose of the medicine was increased to 10 mg. I experienced dizziness and vague pain in left hand and severe burpings. Previously, during my root canal treatment...  Read Full »

Which one is better angioplasty or bypass surgery?

Query: Hello doctor,Last week, during night time, my relative developed chest pain and was feeling very uncomfortable. He was taken to a hospital and after tests and preliminary medications, he has been advised to do PTCA to RCA. His age is 51 years old. He has a diabetic history. The reports hav...  Read Full »

Do you have a question on Coronary Angiography or Cerebral Angiography?