Did you know that bend penis and pain on erection can be signs of Peyronie's disease? Learn about its causes, symptoms, diagnosis, and treatment option and get help immediately 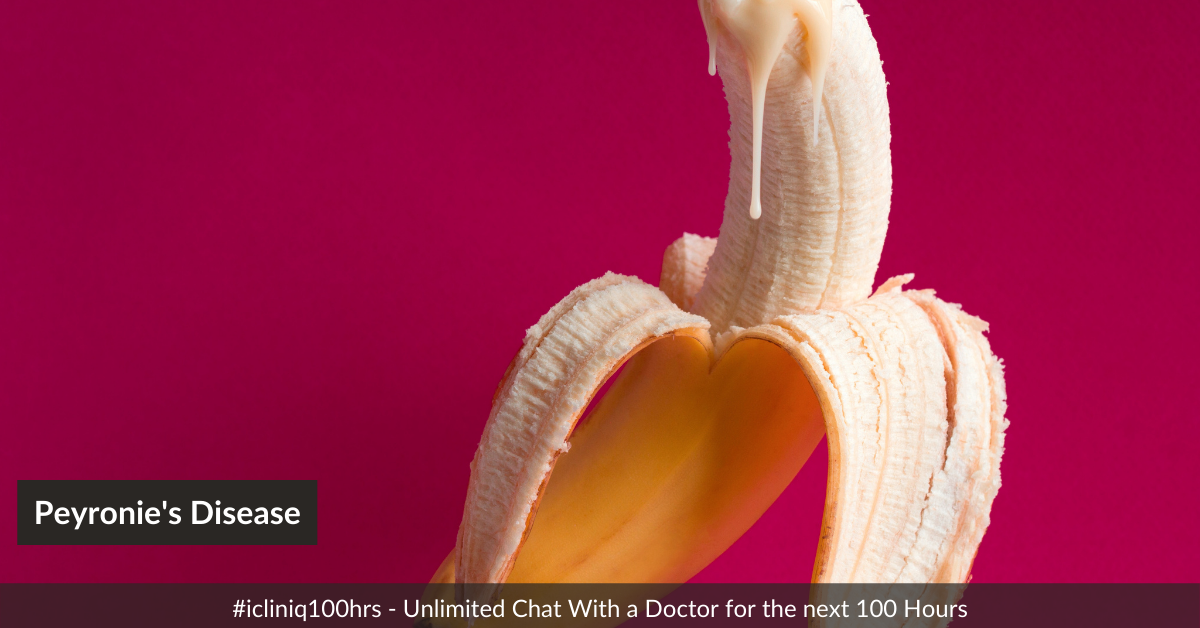 What Is Peyronie’s Disease?

Peyronie's disease is a condition that results in a painful and curved erection. It is caused by the formation of fibrous scar tissue on the penis. The shape and size of penises can vary, and slight curvature without pain or discomfort is nothing to be worried about. You should consult a doctor if your erection significantly bends and causes pain. In most men, this condition makes it difficult for them to maintain an erection, which prevents them from having sex. It also results in stress and anxiety due to the inability to maintain erection, pain, and penile shortening.

Peyronie's disease rarely goes away on its own. If left untreated, the condition will either remain as it is or get worse. Diagnosing and treating this condition early might help it from progressing and treatment soon after developing the condition helps improve symptoms and might keep it from getting worse. Peyronie’s disease is a rare form of ED (erectile dysfunction). Read this article to understand more about this condition.

What Are the Symptoms of Peyronie’s Disease?

The exact cause of Peyronie's disease is not completely known, but it seems to be affected by various factors. It is believed to be a result of repeated penile injuries. The possible causes of injury are during sex, sports, or accidents. After the injury, the scar tissue forms in an unorganized manner, which leads to plaque formation. This plaque formation can be felt under the skin of the penis.

In a healthy man, the penis contains a tube called corpus cavernosum on each side, which contains blood vessels. Each one of this corpus cavernosum is surrounded by an elastic tissue called the tunica albuginea. This tissue stretches when a man has an erection. On sexually arousal, blood flow through these tubes and the penis expands and stiffens.

Researchers are trying to find out other causes of this condition because in most cases, no history of an injury is present.

What Are the Risk Factors of Peyronie’s Disease?

Various factors seem to increase the risk of a man getting Peyronie’s disease. The common risk factors include:

As soon as you notice signs or symptoms of Peyronie's disease, consult a doctor. The best chance to improve this condition is to get treatment as early as possible.

How Is Peyronie’s Disease Diagnosed?

Your doctor will be able to diagnose this condition with the help of a physical examination. They will look for the presence of scar tissue in the penis. Sometimes to rule out other conditions that can cause similar symptoms and to diagnose the cause, the doctor might suggest you get the following tests done:

How Is Peyronie’s Disease Treated?

As of now, there is no cure for this condition. Treatment is done to manage symptoms, and the condition might get better on its own. Most doctors do not prescribe medicines right away, rather they wait and see how the symptoms are. The treatment options include:

1) Medicines - Medicines are injected directly into the penis if penile pain and curvature are getting worse. The drug prescribed is Clostridium hystolyticum. It is only indicated in men with penile curvature of more than 30 degrees. This drug helps break down the collagen buildup.

The other drugs sometimes used are Verapamil (orally) and Interferon (injection).

2) Iontophoresis - Here, a weak electrical current is used to deliver medicine through the skin.

3) Other nondrug therapies that are being tested are:

4) Penile exercises - People undergoing treatment with Clostridium hystolyticum are benefitted with penile exercises. Here, the penis is stretched when not erect for 30 seconds, which can be repeated thrice daily. When you experience spontaneous erection, try to straighten it for 30 seconds.

5) Surgery - It is only done if other options fail, and the condition has resulted in severe deformity of the penis. Surgery is done to shorten the unaffected side, lengthen the side with scar tissue, and penile implants.

What Are the Complications of Peyronie’s Disease?

If left untreated, Peyronie’s disease can result in the following complications:

If you are experiencing symptoms similar to Peyronie’s disease, then you can consult experienced doctors from your home with the help of online healthcare platforms.

How Does One Get Peyronie's Disease?

The exact cause for Peyronie's disease is not known. It is known to occur due to any injury to the penis while playing games and sexual intercourse. This injury will result in the formation of scar tissue that might cause Peyronie's disease.

What Is the Treatment for Peyronie's Disease?

Can Peyronie's Disease Heal on Its Own?

Peyronie's disease heals on its own only in rare cases. In others, a proper treatment plan is necessary to sort out the condition. In most of the cases, the treatment is known to be helpful. You should consult your doctor for a faster recovery.

What Happens if Peyronie's Disease Is Not Treated?

If Peyronie's disease is not treated, then it can result in the following complications.
- Excessive stress and anxiety.
- Lack of sexual performance.
- A decrease in the length of the penis.
- Reduction in penis length.
- Erectile dysfunction.
- Poor personal relationships.

Massage is known to alleviate Peyronie's disease. It is known to be highly beneficial when it is done along with another form of treatment. There are several methods of Yoni massage that are effective for the problems of the penis.

How Do Doctors Diagnose Peyronie's Disease?

The diagnosis requires a clinical examination of the penis. The presence of scar tissue is identified by a doctor. The size of the penis will also be measured by the doctor if the shortening of the penis is suspected. The blood flow to the penis and other pathological conditions are identified using ultrasound when the penis is in an erected state.

Vitamin E helps in Peyronie's disease because scarring can be effectively treated using vitamin E. It is a common method of choice for many doctors. The dosage is usually adjusted around 200-300 mg/dL, as higher doses could be harmful.

How Successful Is Peyronie's Disease Surgery?

Surgery is recommended for patients who need to correct the abnormal curvature of the penis. Surgery can also be the option for patients who do not improve with non-surgical procedures for more than 12 months.

Yes, Peyronie's disease could be bad because the nature of the disease causes an inferiority complex in a man. He considers himself as unfit for sexual activities. Pain caused in the penis could be depressing, and it is known to increase the anxiety levels in males.

Can You Live With Peyronie's Disease?

Is Peyronie's Disease a Progressive Condition?

Yes, Peyronie's disease is a progressive condition. It begins in the milder form initially and increases in intensity. In some patients, it can heal by itself within six to fifteen months. If this condition is causing you discomfort for a prolonged period of time, then you have to consult a doctor immediately.

How Can You Prevent Peyronie's Disease?

Peyronie's disease can be prevented in the following ways.
- Aged men tend to have an erection that is not very rigid. When they start experiencing this, it is necessary to get help from doctors. With the help of medications, injury, or excessive bending during intercourse can be prevented.
- The position of sexual intercourse should be focused only on in and out rather than twisting and bending positions.
- Women on top position can be avoided as it can increase the chance of bending of the penis. There are more possibilities of injury in this position also.

How Long Does It Take to Cure Peyronie's Disease?

With proper treatment options, it is possible to cure Peyronie's disease. If the exercise is combined along with medications, you can expect a speedy recovery.

Is Peyronie's Disease a Permanent Condition?

If Peyronie's disease is diagnosed in an earlier stage, it is possible to ease the symptoms. It is not a permanent condition, but the complete recovery is found in only a very few patients.

Can Peyronie's Disease Cause Infertility?

I Have A Short and Curved Penis. How to Boost My Libido

Query: Hello Doctor,  I have a short and curved penis. The curvature is towards left side. How can I make it straight? I want to increase its length by around 2 inches. How to boost my libido, stamina and erection time without any side effects? Are there any tablets or should I just follow a particula...  Read Full »

Is it possible to have a tunica albuginea rupture and be unaware of it?

Query: Hello doctor, If I were to strain or have a small superficial rupture to the tunica albuginea during erection, would I notice this in any way? Will there be any pain or bruising? I have read somewhere that the tunica has no pain nerves. That is why I wonder. There is no pain or abnormality noticed....  Read Full »

How to pull back my tight foreskin?

Query: Hi doctor, I am 18 years old. I am uncircumcised, and my foreskin is not fully retractable. I am struggling to pull it back to expose about 20 % of the head when it is erect. When flaccid, it is easier to pull the skin, and I can get about 40 % to 50 % of the head exposed. My penis has a slight cur...  Read Full »

Do you have a question on Erectile Dysfunction or Peyronie's Disease?