Erectile dysfunction is a failure to achieve an erection adequate to have intercourse, which is common in diabetes patients. Read the article below to know more. 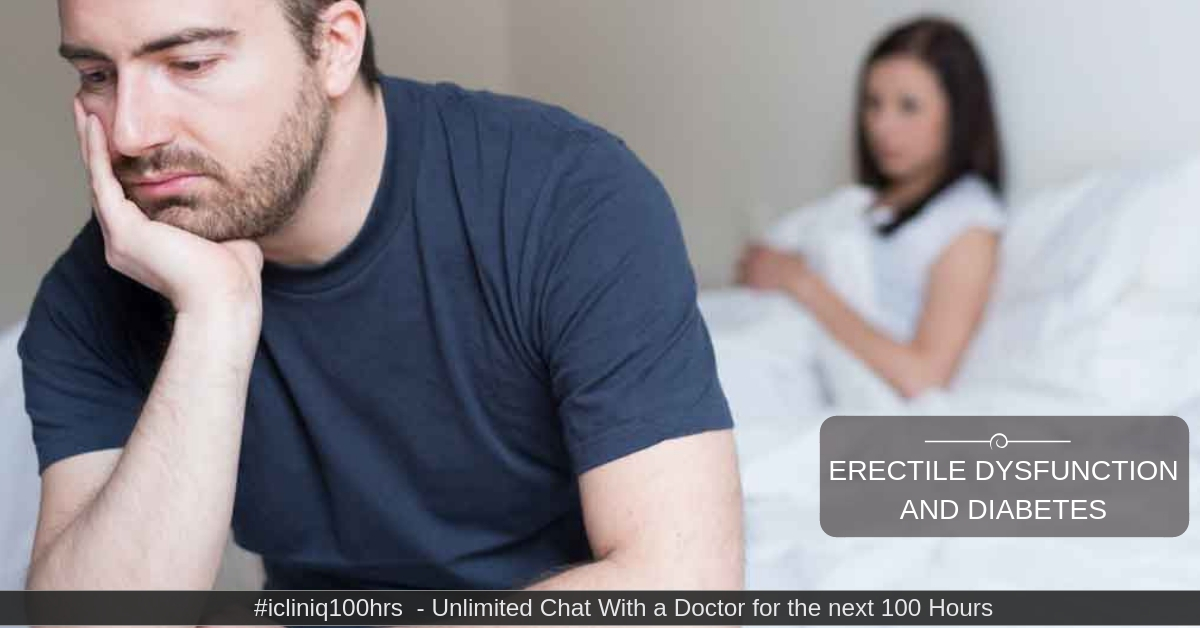 Why Is Erectile Dysfunction Common in People With Diabetes?

Why Does Erectile Dysfunction Happen?

How Does Erection Happen Normally in the First Place?

Understanding this will help you understand the "why" of erectile dysfunction in diabetes mellitus.

The penis, in its normal and more common physiological state, remains flaccid. The other physiological state for this organ is the erection. The fluctuation between these two states results due to the activity of muscle cells in the corpora cavernosa. The contraction of the muscles leads to the flaccid state, and the relaxation of the same muscles leads to the erect state. The erection occurs by the release of chemical messengers like nitric oxide, acetylcholine, etc. This relaxation of the smooth muscles leads to an increase in blood flow to the penis. The arterial supply increases due to the arteriolar dilatation.

Related Topics
I have no desire for sex.Is it because I use tobacco?
I have fear of ED since I turned 50. Is my condition worrisome?
My penis is not erecting properly. Please advice ayurvedic treatment.

On the other hand, venous compression leads to the reduced outflow of blood from the penis in the venous system. This causes a rise in the pressure within the urethra in the penis and may lead to the change of the physiological position from the dependent (or flaccid) state to the full erection phase. Some other muscles also help the erection allowing the rigid erection phase.

Why Does Diabetes Mellitus Lead to Impotence?

A longer duration of diabetes mellitus, poor control of sugar, older population, and patients with diabetic neuropathy are at a higher risk of developing erectile dysfunction. These factors also cause erectile dysfunction to be more severe as compared to that in the non-diabetic population. Such patients also report a lower response to medicines. Therefore, both the impairment and the reduced quality of life are higher in the diabetic population.

The Mechanism of Erectile Dysfunction in People Who Suffer from Diabetes Mellitus:

1. It is a neuropathic process - diabetic neuropathy involves both autonomic as well as somatic nerves. These nerves are the ones that are largely responsible for penile erection. Nitric oxide (also known as an endothelium-derived relaxing factor) is a signaling molecule (or a chemical, biological messenger) in the body that is supplied through the nerve. The cell lining of the blood vessels all over the body uses nitric oxide to allow vasodilatation and increase blood flow. When the nerves are affected, this messenger is reduced, and the usual regular relaxation of the corporal smooth muscle does not happen. This relaxation of the corporal muscle is the main reason behind the occurrence of a penile erection. Since the release mechanism of nitric oxide is impaired due to nerve damage, an erection does not happen.

2. It is also a vascular problem - diabetic vascular dysfunction occurs due to lipid deposition in the blood vessels (also known as atherosclerosis). This leads to a reduction of the diameter of the vessel wall lumen where the lipids are deposited. The decrease in the lumen wall reduces the blood flowing in the blood vessels (and therefore to the penis). Thus, an erection is not achieved. This vascular damage also affects the release of nitric oxide (whose need is already explained above).

3. It is a hormonal problem (other than diabetes mellitus) - there is a lower testosterone level in diabetic men because of its effect on the 'master endocrine gland,' the pituitary. This reduces the reproductive functioning and sexual desire amongst diabetic men.

4. It has a large psychological component in many patients - Depression, a common psychiatric condition, is much more commonly seen in diabetic men. This, coupled with other factors described above, aggravate erectile dysfunction further. Erectile dysfunction itself increases mental stress, which affects personal relationships, sexual life, and quality of life. This further propagates depression.

How to Tell If Erectile Dysfunction Is Due to Psychological Cause or a Disease?

These features are not observed if one has erectile dysfunction due to a disease like diabetes mellitus. Often, these patients complain of associated pain in the penis.

Proper treatment of diabetes mellitus, regular screening for low testosterone, and early detection of erectile dysfunction can improve these people's health and quality of life.

Is erectile dysfunction related to my thyroid disease?

Query: Hello doctor, I am a 72-year-old male with a height of 5 feet 6 inches and a weight of 78 kg. I have been on Eltroxin 100 mcg and Amloz 5 mg for two years for hypothyroidism. I am feeling fatigued and have an intense appetite. I have lost fertility for the last one year. My ESR value is 41. I also ...  Read Full »

Do you have a question on Erectile Dysfunction or Sexual Dysfunction?