Hydroxychloroquine is a drug used to treat malaria, and also for rheumatoid arthritis, lupus, etc. Learn about its uses, dosage, drug warnings, side effects, precautions, drug interactions, and more. 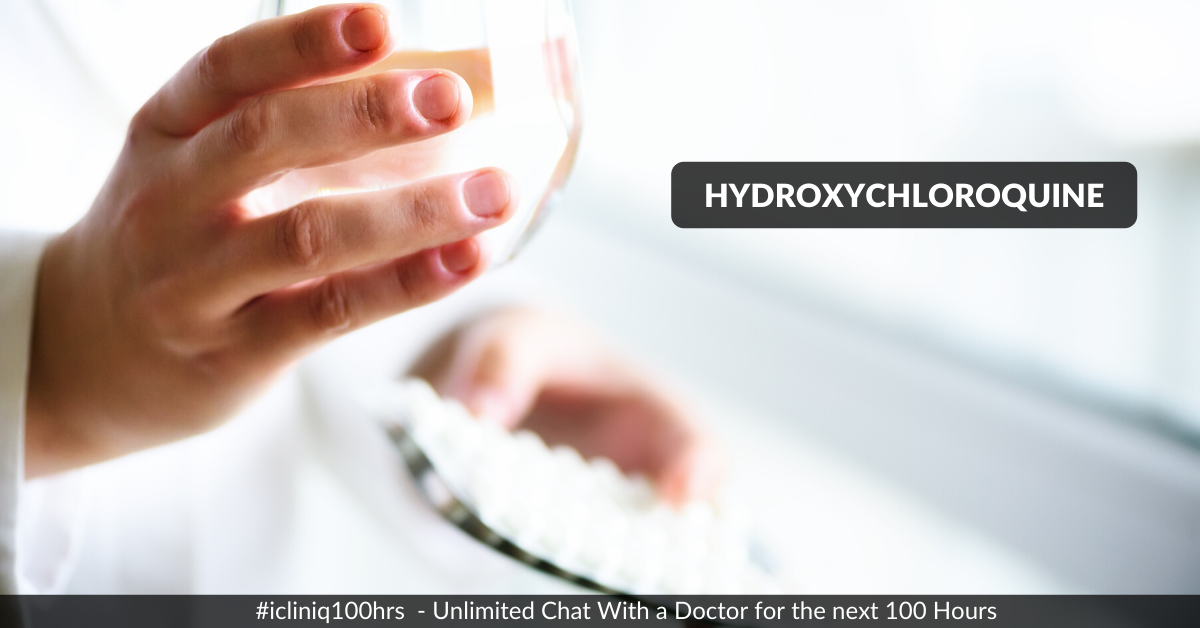 Hydroxychloroquine, otherwise called hydroxychloroquine sulfate, is an oral tablet and a prescription drug. It is available as a drug called Plaquenil and a generic version. It was first used to prevent and treat malaria, which is a viral infection spread through mosquito bites. Nowadays, it is also being used in various immune system disorders. Hydroxychloroquine can be used alone or in combination with other drugs.

Keep this medicine away from children, as it can be fatal even if they swallow a few tablets. Avoid taking this medicine if you have skin conditions such as psoriasis, as it can worsen it. This tablet can potentially affect your vision (eyes) and can result in heart disease.

Hydroxychloroquine belongs to the class of drugs called antimalarials. The drugs in this group are used to treat and prevent malaria. Some of the other drugs used against malaria are Quinine, Chloroquine, Pyrimethamine, and Mefloquine. Hydroxychloroquine is also considered a disease-modifying anti-rheumatic drug (DMARD), as it relieves pain and swelling seen in rheumatoid arthritis and other inflammatory autoimmune conditions.

What Is Hydroxychloroquine Used For?

Hydroxychloroquine is used in the treatment of:

Never take Hydroxychloroquine or any other medicine without consulting your doctor first.

How Does Hydroxychloroquine Work?

The exact mechanism of action of Hydroxychloroquine is still not understood, but it is believed to act against the erythrocytic forms of malarial parasites. Hydroxychloroquine has the ability to bind and alter DNA. This drug is taken up by the acidic food vacuoles (membrane-sacs that contain food in the malarial parasite) in the human blood (RBC). This results in an increase in the pH of the food vacuoles, inhibiting phospholipid metabolism. It also suppresses the asexual reproduction of the parasite in the red blood cells.

And as for its role in treating arthritis, hydroxychloroquine is believed to be a mild immunosuppressant. It inhibits the production of rheumatoid factor, which is the protein that is produced by the immune system and can attack the healthy tissue of the body. This drug gets accumulated in white blood cells (WBC) and inhibits the action of various enzymes, which are responsible for the breakdown of cartilage.

There have been no reports of the habit-forming tendency in people taking HCQ.

Avoid taking this medicine after it expires. The expiry date will be printed on the back of the pack.

What Is the Dosage of Hydroxychloroquine?

The dosage of Hydroxychloroquine will be decided by your doctor based on your age, weight, and other medical conditions. You will be first started on a low dosage, and depending on how your body reacts, the dosage will be modified. HCQ is available in 200 mg strength. 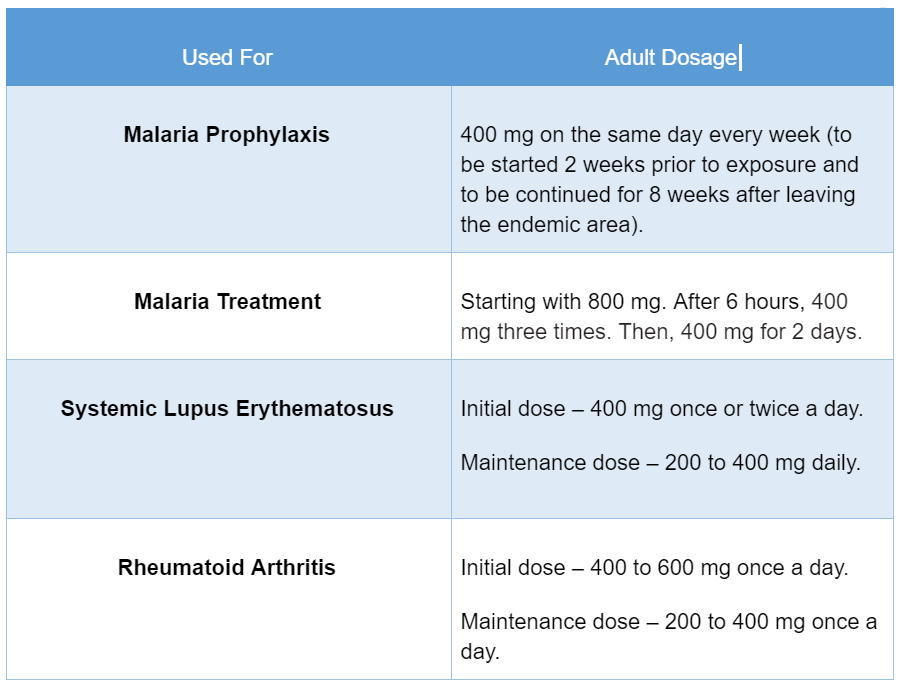 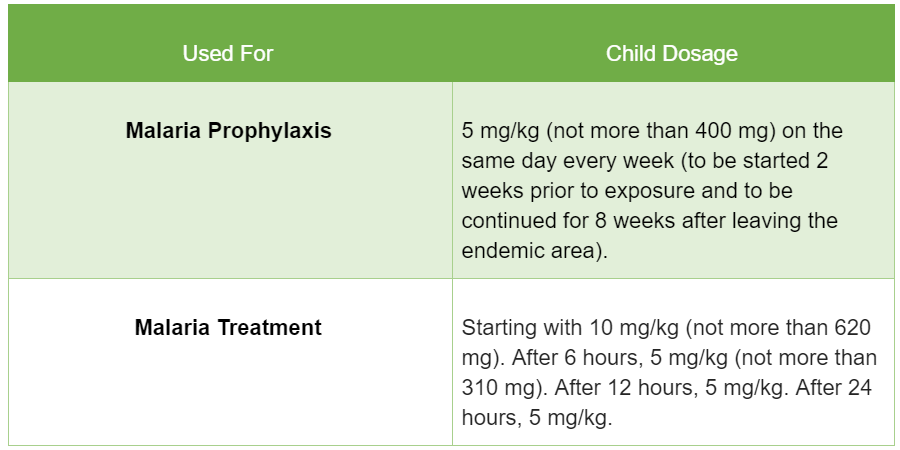 In patients with kidney and liver disease, the dosage will be adjusted by your doctor depending on the creatinine clearance and liver function test.

How to Use Hydroxychloroquine?

HCQ is available in tablet form, which is to be taken orally. To prevent malaria when you travel to a country where malaria is epidemic, two tablets have to be taken once a week on the same day every week. This has to be started at least a couple of weeks before you travel and has to be continued for at least 8 weeks after coming back.

For the treatment of malaria, generally, four tablets are taken together, and then the dose is tapered over the next two days.

For children under 18 years of age, the dose for malaria prevention and treatment has to be calculated based on the child’s weight. This your doctor will do, and never take Hydroxychloroquine or any other medicine unless prescribed by your doctor.

In case you are using this medicine for rheumatoid arthritis, it should lower the symptoms in 6 months. If it does not improve, stop the drug and consult your doctor. In case the drug relieves your symptoms, then do not stop it before consulting your doctor, as the symptoms of rheumatoid arthritis will start again. This medicine can make you nauseous. Taking it with a glass of milk will help reduce this. Never take it more or less than prescribed and follow your doctor’s advice strictly.

If in case you miss a dose, you can take it as soon as you remember about missing the tablet. But if it is already time for the next dose, then do not take two tablets together, as it might result in severe adverse reactions. Just skip the missed dose and take the next dosage.

There are a few things that need to be considered before taking this tablet, and tell your doctor if you have any of the following conditions:

What Are the Side Effects of Hydroxychloroquine?

The common side effects seen with Hydroxychloroquine oral tablet include:

These symptoms are usually mild and most usually go away in a few days. If it does not, consult a doctor immediately.

The serious side effects seen with Hydroxychloroquine oral tablet include:

If you notice any of these symptoms, call your doctor immediately. This drug can also cause other side effects that are not listed here, so always consult a doctor if you notice any unusual symptoms.

What Are the Interactions of Hydroxychloroquine?

It is natural for all drugs to interact with other drugs, food, and supplements. This interaction can result in certain unwanted side effects. The common interactions of HCQ are:

What Are the Common Brand or Trade Name of Hydroxychloroquine?

The common brand or trade names of Hydroxychloroquine are:

Consult a doctor if you do not feel fine even after taking Hydroxychloroquine. Avoid self-medication.

What are Chloroquine and Hydroxychloroquine?

Both Chloroquine and Hydroxychloroquine are medicines that are derived from the quinoline molecule. They are used to treat an acute or severe type of malaria. It can also be used as prophylaxis against malaria.

What does Hydroxychloroquine do for arthritis?

Hydroxychloroquine is a disease-modifying anti-rheumatic drug (DMARD), as it is used in the treatment of various autoimmune disorders, such as rheumatoid arthritis, systemic lupus erythematosus, and Sjögren syndrome. It has been found to reduce joint pain and inflammation associated with rheumatoid arthritis.

Why is Hydroxychloroquine so expensive?

Imported drugs can be expensive. The price of Hydroxychloroquine will be different based on the location or country.

How long does Hydroxychloroquine stay in the system?

HCQ can stay in the system for almost three months. So if you have to stop the medicine due to any side effects, it might take a while for the effects of the drug to fade away.

What is the ideal time to take Hydroxychloroquine?

Most medicines that are used for autoimmune conditions, including Hydroxychloroquine, have to be taken twice in a day. So if a person takes the first dose in the morning, the next dose should be taken after 8 hours. Taking this medication with milk will reduce nausea.

Can Hydroxychloroquine be used as prophylaxis for coronavirus?

NO! Hydroxychloroquine or Chloroquine or any drug for that matter should not be taken as a way to prevent the new coronavirus infection (COVID-19). There is no drug or vaccination available for this infection yet.

Hydroxychloroquine can result in various side effects and complications, which can potentially be fatal. So avoid self-medication. If a doctor prescribes this medicine, he or she would have considered its risk against the benefits.

What is the chemical composition of Hydroxychloroquine?

Hydroxychloroquine is composed of 4-aminoquinoline with immunosuppressive and antimalarial properties.

Does Hydroxychloroquine cause hair loss?

Hydroxychloroquine has not been known to cause hair loss. Instead, recent studies have shown HCQ to be effective against some types of alopecia, which is an autoimmune condition that results in bald spots.

Are there any tests available to check pelvic muscle weakness?

Query: Hello doctor, I am suffering from pelvic muscle weakness. I want to know is there any blood tests or any other diagnosis.  Read Full »

What is the reason behind my muscle weakness?

Query: Hello doctor, My age is 25 years. My height is 5'10" and I weight 78 kg. I am suffering from muscle twitches and extreme muscle weakness and muscle pain from last one month. I went to a neurologist and he says reflexes are normal and asked me not to worry and he put me on tablet Remylin-D. I am curr...  Read Full »

How to develop my immunity if I am allergic to Hydroxychloroquine?

Query: Hello doctor, I am allergic to Quinolones, Metronidazole, Ibuprofen, Diclofenac, and Aspirin. Please tell me whether I am allergic to Hydroxychloroquine or not. If yes, then please tell me ways to how to develop my immunity? Food that I should eat and should I drink hot or cold water? What all the...  Read Full »

Do you have a question on Rheumatoid Arthritis or Muscle Weakness?