All About Gum Abscess - Causes, Symptoms, Treatments, and Prevention

Pus-filled pockets that form in the gums (gingiva) surrounding the tooth is called gum abscess. To know more about this, read the article. 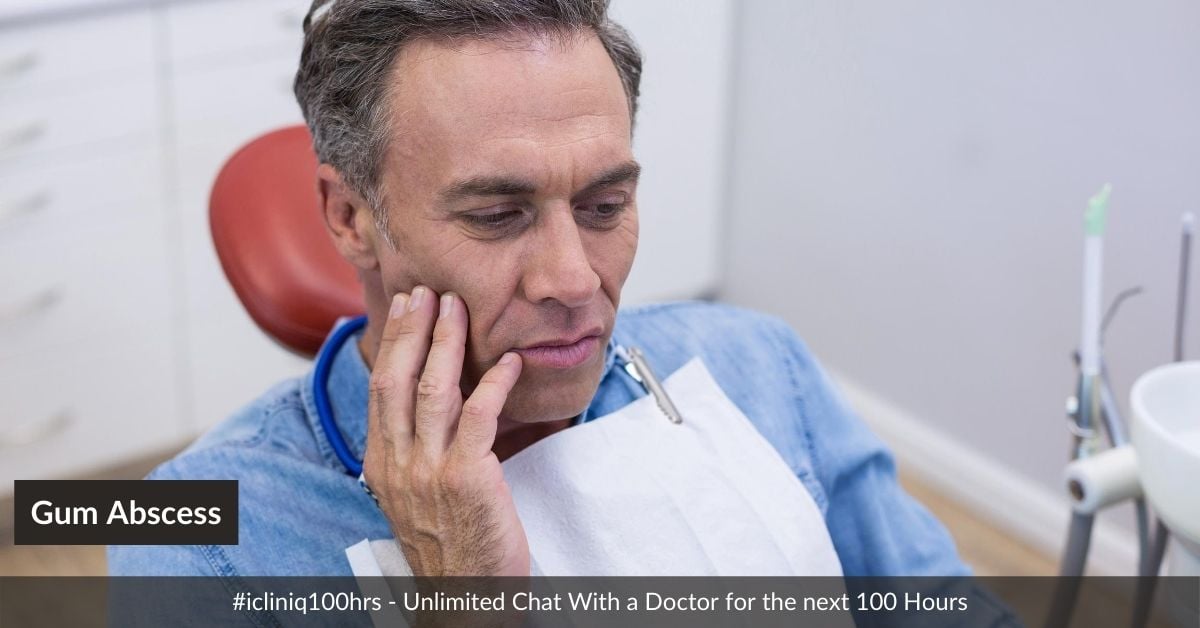 Any abscess arising in the region of the gum can be due to either of the three causes:

Why does a Gum Abscess Occur?

Reasons for formation of a gum abscess in the cases as mentioned above:

Gingival abscess - This occurs in a healthy gum due to sudden trauma, like if a food particle gets stuck accidentally in the gum region as for example while biting an apple, or if the dental floss is used with excessive force. Any such incident leads to acute pain and should be reported immediately.

Periodontal abscess - This occurs in a tooth which is already weak and has lost its supporting structures (periodontium). This can present in an acute or chronic form and its presence can lead to the enhancement of the already existing disease and so this needs to be reported immediately.

Related Topics
Two of my wisdom teeth are impacted. Is it better to remove?
All About Gum Abscess
I got a teeth cleaning done,but the inflammation is still there.What do I do?

Periocoronal abscess - This occurs due to trauma or infection around a tooth which has not yet erupted, mostly an unerupted wisdom tooth.

Periapical abscess - A decayed tooth which has been overlooked for a long period of time will result in severe pain, usually leading to a periapical abscess. The support of the tooth is intact in such a case.

How to Know if you have an Abscessed Tooth?

Since the constant long term presence of such an abscess can result in damage to the structures that support your teeth it is important to recognize and treat these at an earlier stage so as to prevent any such untoward complications.

It is necessary to know that such a condition can be either acute or chronic.

Acute abscess will give rise to obvious symptoms such as:

Chronic abscess may not give extreme discomfort and so is usually overlooked by the patient though it should be noticed at the earliest so as to avoid tooth loss and further infection. The symptoms are as follows:

How to Treat an Abscessed Tooth?

Both acute and chronic abscesses need to be treated.

Such a presence, be it of any type would usually require antibiotics and pain killers to be taken to reduce the infection which should be taken after a prescription and not over the counter. Drainage of the abscess after administration of local anesthetic is needed which removes the cause.

Antibiotics and pain killers are not needed in such a type until you are medically compromised, like if you have diabetes. Dentist will administer some local anesthetic and remove the pus along with the disease cause. In such a case it usually heals well with a good result. In longterm abscesses, the tooth would have lost most of its support and so, the tooth may need to be removed. Thus an early recognition and treatment is of much importance.

Such an abscess since is formed around teeth which have not erupted, if the position of tooth is such that it will not erupt the teeth will need to be removed or if not so, antibiotics along with local drainage usually suffices. But, such problem may exist again if there is trauma again when the tooth erupts.

Such an abscess will require the treatment of tooth decay which will need a root canal treatment and also antibiotics and pain killers have to be taken.

How to Prevent the Formation of such an Abscess?

Any abscess arising in the structures that support the tooth is the most detrimental and so it should be understood that its prevention is important, for which:

Do you have any of the symptoms mentioned above? Consult a dentist online for help --> https://www.icliniq.com/ask-a-doctor-online/dentist

What is a gum abscess?

A gum abscess is formed when the infection from a tooth or periodontal pocket takes the path of least resistance and forms a swelling outside the tooth near the gum. It is a painful condition, and in some rare cases, it can be fatal as the infection can travel to the bloodstream and result in sepsis.

A gum abscess looks like a small raised pimple on the gum near the affected tooth. If you look carefully, you might see pus draining out from the center of the abscess. It might also cause pain, redness, and swelling in the surrounding areas.

How is a gum abscess drained?

The dentist will drain the abscess by making a small cut on it. The pus gets drained out, and the area is then irrigated with saline. And the infected periodontal pocket is cleaned by scaling and root planing.

How to drain a gum abscess at home?

It is not advisable to drain a gum abscess at home.Even if you poke or burst the abscess, it will form at the same place in a day as the source of infection (tooth) is still present. It is best to get the gum abscess treated by a dentist. To reduce pain, you can rinse your mouth with warm salt water for 4 to 5 times.

What are the home remedies for a gum abscess?

A gum abscess can be treated only by a dentist, but some home remedies help reduce pain and discomfort. The home remedies include:
Rinsing the mouth with warm salt water.
Mix baking soda (½ tablespoon) and water (½ cup) and swish it in the mouth for 5 minutes.
Place ice cubes in a towel and hold it against the skin near the abscess.

What are the home remedies for a gum abscess?

A gum abscess can be treated only by a dentist, but some home remedies help reduce pain and discomfort. The home remedies include:
Rinsing the mouth with warm salt water.
Mix baking soda (½ tablespoon) and water (½ cup) and swish it in the mouth for 5 minutes.
Place ice cubes in a towel and hold it against the skin near the abscess.

How is a gum abscess treated?

Firstly, the abscess is drained by placing a small incision. Then the periodontal pockets are cleaned with scaling and root planing. The dentist then takes an X-ray to assess bone loss. If there is a lot of bone loss, and the tooth cannot be saved, the dentist will extract the infected tooth. If the tooth can be saved, then root canal treatment is performed to eliminate the infection.

How long does a gum abscess take to heal?

After treatment, the pain and swelling will take three to four weeks to subside completely. Take all the painkillers and antibiotics prescribed by your dentist after the procedure, as it will help in eliminating the bacteria that caused the infection

Is a gum abscess an emergency?

Yes, it is important to get a gum abscess treated as early as possible. If left untreated, the infection can spread deeper into the jaw bone, sinuses, and other parts of the face and neck. In some rare cases, the infection travels to the blood and causes sepsis, which can be fatal.

Can a gum abscess go away without draining?

No, it is not possible for the abscess to go away without draining or any other treatment. The abscess might pop and drain, and you might not be able to see it on the surface of the gum, but the infection will be still present. This, when left untreated, can spread.

Can a gum abscess be painless?

Sometimes, a gum abscess can be painless during an acute infection. Even if you have a painless abscess, it is essential to get it drained and treated.

What could be the reason for upper jaw pain due to which I am not able to close my mouth?

Query: Hello doctor,From my left front tooth, all the way to the back of my teeth on top hurt. I cannot close my mouth and it feels like the pain is going up into the bone under my nose. What could that possibly be?  Read Full »

Can tooth abscess spread throughout the body?

Query: Hi doctor, I am 26 years old female. I have an abscess in my tooth for over a year now. I am getting it infected for the second time now. The previous infection was before six months. It is present at the bottom of one of my lower molars. It hurts me a lot. How long will it take to spread throughou...  Read Full »

Do you have a question on Antibiotics or Gingival Abscess?