Tips to Protect Your Ears During a Flight

This article talks about a few precautions that need to be taken to prevent ear problems when flying. 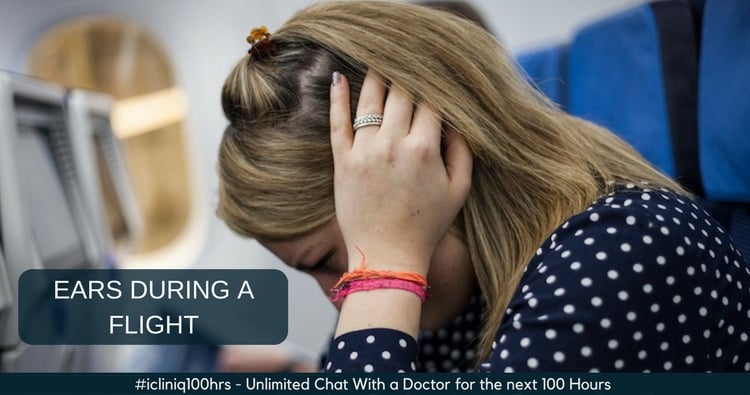 What Is an Eustachian Tube?

Any change in the atmospheric pressure, like during a flight or deep-sea diving, compromises the functions of the eustachian tube. It gets further aggravated if there is a common cold or a nasal obstruction.

What Is an Airplane Ear?

Also called ear barotrauma, airplane ear occurs when stress is exerted on the eardrum due to a deviation in the ear pressure. It is otherwise called aerotitis media or barotitis media.

How Is an Airplane Ear Caused?

During an ascent or a descent of the flight, pressure changes occur in the nasopharynx because of a rapid change in altitude. The eustachian tube neutralizes the effect on the ears, which usually opens up with a click. But, in the case of a nasal allergy or an infection, dysfunction of the eustachian tube occurs due to a collapse or swelling of the tube. This causes a failure of the tube to open. It leads to a sudden onset of negative pressure inside the middle ear, which in turn causes severe pain in the ears during ascent or descent. This pain often lasts for a week to 10 days. If it persists longer, medical attention is necessary.

As the name suggests, the most common cause of airplane ear is traveling at a high altitude, especially in airplanes, helicopters, etc.

However, it can also occur due to the below-mentioned causes:

Though mountain and elevator rides might produce ear barotrauma, it is usually mild.

Related Topics
What precautions to take when flying with a three month old baby?
Can mold exposure cause an ear infection?
Homeopathic Management of Acute Otitis Media

What Are the Symptoms of an Airplane Ear?

Airplane ears can be either unilateral or bilateral. In most cases, it is mild, while there can be a manifestation of severe symptoms in a few.

The following are the symptoms of airplane ear:

What Increases the Risk of an Airplane Ear?

The following are the conditions that make you prone to ear barotrauma:

What Precautions Should Be Taken During a Flight To Prevent Airplane Ear?

What Precautions Should Be Taken to Prevent Airplane Ear in Children?

What Are the Complications of Airplane Ear?

If the above precautions are not taken, there will be a severe negative pressure formed in the ear, which causes severe ear pain and induces a block in the eustachian tube due to glue-like secretions produced in the middle ear. This condition is called 'glue ear' or 'serous otitis media.' It needs to be immediately attended to by an ENT (ear, nose, and throat) specialist, or it can lead to a conductive hearing loss. In addition, surgical intervention may be necessary to get the glue formed inside the ear removed.

Ear barotrauma can also lead to:

While traveling in an airplane, it is necessary to take adequate prophylactic measures to prevent the occurrence of an airplane ear. In addition, simple tricks like swallowing and yawning during a flight can help prevent ear barotrauma. When you experience any of the conditions that make your airplane ear worse, it is necessary to reach out to an ENT specialist to know the possible preventive measures that can be taken. Also, get help from your doctor when you have severe ear pain, discharge, or loss of hearing after a flight.

My entire foreskin is swollen and red. Is it due to the steroid cream I used?

Query: Hi doctor, I am 51 years and nondiabetic. It seems I am suffering from balanitis for the past two weeks. Earlier, I had the problem of ringworm, but then after medication of Clotrimazole ointment and oral tablet Terbinafine, it was treated. After a couple of months of that problem, I noticed two wee...  Read Full »

The entire surface of the fetus is fluid-filled. What does it mean?

Query: Hello doctor, Based on the result of the ultrasound, the entire surface of the fetus is fluid-filled from the head all the way to the body of the fetus. What does it mean?  Read Full »

Article Overview: You may not find doctors or medical help around whenever you are vacationing at a remote place. In such situations, homeopathy can save your vacation.  Read Article

Overview: Vacation is a time when you enjoy yourself with your family and friends, but a sick person can ruin the holiday. Most people carry medicines with them while traveling. If you are taking your kids, it is crucial to carry their medication along as well as they are vulnerable to illnesses du...  Read Article

Do you have a question on Ent or Otitis Media?